Adaptations Of The Mad Hatter Character

The Mad Hatter is one of the main characters in Lewis Carroll’s novel Alice in Wonderland. The novel has been adapted and re-imagined for different generations since 1865. It has been able to cross over to various platforms giving the Hatter different personas in his character. Here are some of them worth reading up on.

Disney adaptation of the Mad Hatter

A lot of people got to know the character of the Hatter through the various adaptations by Disney Productions. From the first movie animation of the novel in 1951 all the way to the latest installment with the Alice Through The Looking Glass. The Hatter’s character has taken a lot of persona through different versions of the novel.

From an annoying character when Alice was still a young child to a protector when she went to Wonderland the second time to a white pawn in the latest movie. There is no doubt that the Hatter’s persona in these movies has been a pivotal role in the plot. It helped convey the different movie lessons the writers wanted to impart to its viewers. 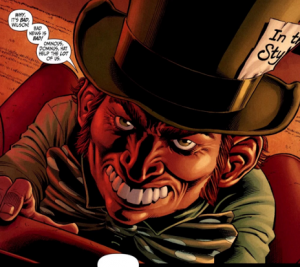 DC comics Batman has Mad Hatter in its lineup of villains as a highly skilled scientist named Jervis Tetch develops an affinity with the original Hatter character in Lewis Carroll’s novel Alice in Wonderland. He believes that he is the incarnation of the character in the novel and he uses his hypnotic skills to take advantage of people. He also uses his love for hats to implant mind-controlling chips which serves to amplify his skills in hypnotism.

Frank Beddor is the Mad Hatter in this trilogy and is the leader of the Queen’s personal guard. His top hat is his main weapon and it received an upgrade. They incorporated blades into it and he uses it to defeat soldiers by cutting them.

Flash forward to 150 years into the future, SyFy took on the Alice in Wonderland franchise and threw in a lot more science fiction into the already thick plot of fantasy elements. The Hatter is the same age as Alice and works both as a resistance fighter against the Queen as well as running the casino owned by the Queen. This double agent character also falls in love with the main protagonist in the film. 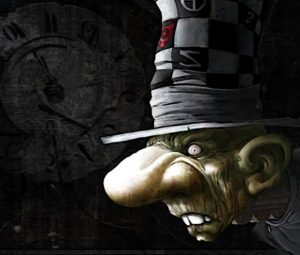 In a dark twist, the Mad Hatter turns sadistic and vicious in this adaptation. He grows out of his love for tea parties and takes on a rather barbarous pastime. He captures and modifies the occupants of Wonderland. He mutilates the bodies switching one part with another he calls automatons without any rhyme or reason.

Mad Hatter in Alice in the Country of Hearts

The Japanese Manga also took the novel under its wings giving the Mad Hatter a peculiar twist in its characterization. Known as Blood Dupre and the leader of the Hatters, he is a charming character who seems to prefer black tea. Throughout the story line, he develops strong feelings for Alice and they even share a kiss in the end.