Alice in Wonderland is one of the most well known and loved movie adaptations of a novel which was meant for children. The novel by Charles Lutwidge Dodgson is considered a fantasy novel that introduced a host of characters that would endear themselves to children as well as those children-at-heart.

Charles Lutwidge Dodgson released the novel in 1865 under the pseudonym Lewis Carroll. As it is known by many as Alice in Wonderland, the original novel that came out is titled “Alice’s Adventure in Wonderland.” As influential as the characters became especially in the fantasy genre, people got the chance to vicariously live off on some of the madness and quirkiness of the novel’s cast of characters. This is one of the reasons why it became a hit with even adults as it rippled out to parts of their real life adventures.

Alice goes down the rabbit hole 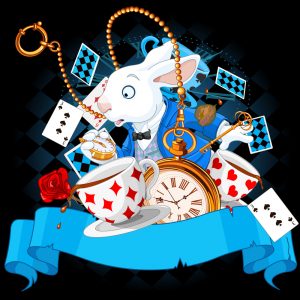 The novel starts off as Alice is lazily sitting down with her older sister in a riverbank feeling bored. Her sister was so into a book that only Alice noticed the White Rabbit who was wearing a waistcoat and seemingly obsessed with his pocket watch. The rabbit was scampering about and when Alice followed him, she fell down a big rabbit hole.

She then finds herself in a hall with a lot of doors in different sizes which are all locked. As she stumbles upon a small key that opens a small door leading to a beautiful garden, she proceeds to drink a potion that makes her small. This would make fit in the small door all while having a piece of cake that would make her big again. 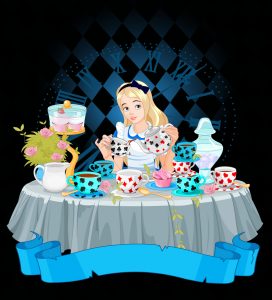 One of the most popular scenes in the novel that has been re-imagined in various movie adaptations for different generations, Alice finds herself in a mad tea party. In that tea time was the Hatter who is described as being mad, the March Hare who had some madness in him as well. The Dormouse was the third participant in that party who was sleeping and being used as a cushion by the two. In more recent adaptations though, the Dormouse is transformed into a sword-wielding female mouse with boundless energy.

The Hatter then goes to explain that they are in a perpetual state of tea time after he tried to sing for the Queen. The Queen then told them they are guilty of trying to murder time with their awful performance. They escaped the Queen but not Time. He trapped them into an endless cycle of tea time in March Hare’s lawn.

After a case of the missing tarts, Alice was called up as a witness. However, she became so big that she was ordered by the Queen to leave citing a rule that very tall participants need to leave the court. Alice argues and the Queen calls on her card and shouts “off with her head!” Alice was having none of it referring to the soldiers as just a pack of playing cards. This is when Alice’s sister wakes her up from her dream brushing aside what she thought were cards in her dream to simply be just leaves.