In the movie franchise Alice in Wonderland, One of the more adorable characters that Lewis Carroll created is the mad hatter. As his character’s name suggests, he seems to have a healthy dose of madness in him coupled with a quirky attitude. This allowed the author to endear the character to the audience as they get to live a little vicariously with the hatter’s slightly crazy personality. Here are some of the most popular quotes that involve the Mad Hatter which you can find in the movie. 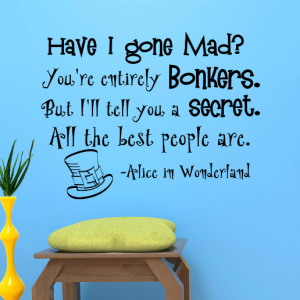 In one of this exchanges with the main protagonist in the movie, Mad Hatter was talking to Alice and he asked if he has gone mad. Alice replied saying that he is entirely bonkers without a doubt. And then she goes on to tell him a secret with how all the best people are considered a little bit mad.

Some of the trailblazers in most industries to date were once considered mad at some point in their journey. This is because you need a certain level of craziness to even believe that your concept would work. Thinking outside the box could label you as weird and at times, mad but you just need to keep believing in yourself.

Have a good head on your shoulders

During a tea party, Alice was about to start her line saying “I don’t think..” and the Mad Hatter interrupts saying “Then you shouldn’t talk.” As rude as that maybe when you interrupt someone who was about to talk, the Hatter was able to use the opportunity to convey a rather important fact of life.

You need you me mindful of the things you say especially to other people. Your words can have the power to hurt or build them up. As such, you need to think your words thoroughly and filter them before you utter them. Be tactful and respectful of other people’s feelings and the world will be a better place.

At the latest installment in the movie franchise Alice Through The Looking Glass, the Mad Hatter and Alice were saying their goodbyes because she had to go back to her own world. The Hatter said, “A dream is not reality, but who’s to say which is which?” This is one of the best parts of the movie as it shares a poignant point in most people’s lives.

We all have dreams in life and there are times it fails to cross over to reality because we are the first ones to doubt ourselves. We immediately catch ourselves arguing that our dreams are too far-fetched to become reality. We then spend a good amount of time daydreaming of what could have been rather than chasing our dreams. Dreams are a good start but you should endeavor to do more than just be a passive dreamer watching life pass you by.